Battle for Dream Island Wiki
Register
Don't have an account?
Sign In
Advertisement
in: Numbers, Hosts, Non-Objects,
and 6 more

Two is an integer and the host of the fifth season of BFDI, Battle for Dream Island: The Power of Two (alternatively known as TPOT). Two makes their first appearance as an inanimate number in the video "X Finds Out His Value", which was uploaded in 2008, and later debuts again, but this time can talk and has limbs and a face, in "The Escape from Four".

X Finds Out His Value (storyboard)

Two usually shows a friendly and optimistic disposition, firstly greeting the competitors while approaching from space and maintaining a positive mood as they advertise their show to the other contestants. They also like to show off their powers to the contestants, and even promises to give their powers to them if they join Two's show. However, Two isn't devoid of negative traits as they can also be arrogant and somewhat sadistic, as they grin smugly when the contestants leave Four, using their powers to attack them, judging by how eager they were to get rid of Four (even saying "Finally!" when they were gone) and how they refer to X as a "silly boy" when the BFB contestants take him away. Two tends to lose their cool and get irritated when they get interrupted or is kept waiting.

In "You Know Those Buttons Don't Do Anything, Right?", however, Two is shown to be a very easygoing, casual host. Compared to Four, they are no where near as sadistic and act very reasonably to the contestants most of the time. Two also seems to care for their contestants and X. In "X Marks the Spot", they were concerned that X's skin would be damaged from Coiny's glue and in "You Know Those Buttons Don't Do Anything, Right?", they were genuinely concerned for Are You Okay after they fell from a long height. Two occasionally has their moments of rudeness, such as laughing at Rubber Spatula for having the least votes to join. And even in that instance, Two felt bad when Rubber Spatula felt that nobody liked them. They are also somewhat lazy, as they don't try fixing the damage caused in "Chapter Complete" despite having immense power. However, Two's more passive approach leaves them susceptible to getting pushed around by the contestants when they mess something up, as shown at the end of "You Know Those Buttons Don't Do Anything, Right?", when they were beat up by the contestants due to them not explaining the challenge properly.

Two's powers are collectively called The Power of Two, which is the prize and title of their show.

Two made their first appearance in the storyboard for "X Finds Out His Value". In it, Two was one of the numbers tossed onto the see-saws in the Equation Playground. Two did not have a major role and did not speak.

In "The Glistening", Two appeared as a recommended character and votes for Ice Cube to be eliminated.

Two makes their first physical and canonical appearance in "The Escape from Four". They are seen approaching Earth, shouting "Hi guys!". When Four was chasing Spongy and Loser after they had escaped Eternal Algebra Class Withfour, Two makes a landing and creates a crater. Four yells at Two and tells them to go to the crowd of recommended characters, but turns their attention to the contestants. They question the contestants, and asks them if they are tired of battling for a dumb prize. Taco says that the A BFDI is awesome, but Two questions her statements, making her fret.

Two says to the contestants "Wouldn't you rather battle for this?" and uses telekinesis on the Bathrooms and transforms it into a five-star hotel. The contestants are amazed by Two's power, with some hesitancy from Golf Ball. Two later uses their power to remove the top of Yoyle Mountain like a lid and get some Magma and spin it into the shape of Two's self. The part of it comes off and falls into Bottle. Bottle initially said it tickles, but stops laughing before screaming in pain. She then shatters from excessive heat.

Two moves a forest as another way of showing their power. Two persuades the contestants to leave Four and switch to compete on Two's show, with 3/4th of the contestants moving. Tree is not convinced by this, and asks why he would like to move a forest when he could just walk. Two impresses Tree by transforming the sun into a red ball with 6 spikes, and proceed to hit Four with it. Tree and several others move to Two, with Tree saying it was "impressive as bark", with Pillow interjecting that bark is not impressive.

After the contestants decide what shows to compete on, Two congratulates the forty contestants that chose to compete in The Power of Two, with Four angrily mumbling. Two then says that the two shows couldn't compete in the same area, so Two grabs a button and presses it, teleporting the Battle for BFB contestants to The Pillary Ruins and removing their permanent changes. Two, glad that Four's group is now gone, questions if everyone was ready to compete, with the contestants happily cheering. The Recommended Characters later complain and want to compete for Two's power. After some pleading, Two allows one recommended character to join TPOT, and tells the viewers to vote which one, thanks to Yellow Face's suggestion.

In "X Marks the Spot", Two and X can be seen playing patty cake and are called "best buds" by Firey. When the Four-Colored Team arrives to take X, some of the TPOT contestants stop them as they prefer X as the host over Four or Two. Coiny suggests gluing X to the ground, which makes Two ask if Coiny knows that glue can damage the skin. When X is taken by the Four-Colored Team (which was due to Lollipop switching Coiny's glue with orange paint), Two waves goodbye to X, calling them a "silly boy", and saying they have valued their time together.

In "Let's Raid The Warehouse", Four angrily looks at the two fingers he's holding up when saying that the Have Nots are up for elimination a second time in a row.

In "Who Stole Donut's Diary?", Four angrily looks at his fingers when saying that they only have two minutes left before they have to leave the courtroom.

In "The Hidden Contestant", Four brings up how 40 of his contestants left for someone they knew for just five or so minutes.

In "Chapter Complete", Two appears briefly in a cameo when Four becomes the Sun, turning it blue. Clock asks Two to somehow stop Four, asking if they're more powerful. Two doesn't want to get involved to which Clock responds, "But the sun is blue!". Two then comments, "—and I'm green," reverting back to what they looked like before the sun started shining blue.

In "You Know Those Buttons Don't Do Anything, Right?", when Fries argues that Two isn't that much better than Four since they've been waiting forever to battle for limitless power, Two teleports to the scene out of nowhere, more than happy to get started, which scares the contestants. After flying to the top of the Bathrooms, announces that it's time for Cake at Stake. No one can hear them, so they levitate everyone to the roof of the bathrooms when Nickel is unable to help. Two reminds Nickel that the viewers voted one of the 26 newbies to join the show and has a purple tomato (mangosteen) as the prize for whoever joins. Two first states that everyone got at least 200 votes, before revealing that Rubber Spatula only got 177 votes. After Rubber Spatula finishes thanking their voters, Two claps, causing them to fall through the roof's floor, which is where they send all of the debuters who fail to join. Two then goes through the rest of the possible debuters until it's down to Nonexisty and Winner. Winner wins and gets the tomato.

Two then realizes that with Winner's debut, there are now 41 contestants, which is a prime number. That means Two would be unable split the contestants evenly. Golf Ball suggests allowing the second-most voted newbie to join (making 42 characters, as no one wanted to quit to make 40 again), and Two agrees. The second-most voted RC is Nonexisty, but he doesn't help with adding up the number of contestants, so Two decides to go with the third-most voted, Price Tag. Afterwards, Two has everyone take the elevator down so they can start team picking. On the way down, Nickel asks how the teams will be arranged and Two goes with 6 teams of 7.

Eggy later tells Two that they finished forming and naming their teams. Two is relieved as they were afraid they'd have to make up the team names themselves, Eggy says that may have been better but Eraser shoves her aside to ask what the first contest is. Two says they were about to announce it until they realized how ugly the area is and asks where the plant life is. Eggy explains that it got burnt in lava. Two asks what color the trees and grass were and Remote answers green and yellow. As a result, Two regrows them with their original colors swapped, with the grass now yellow and the leaves on the trees green, which Naily likes, despite Remote wanting to switch it back. Two then starts the intro.

Finally, Two announces the first contest, which is to get to the top of the building. Two then makes the mistake of jumping all the way to the top of the building before adding that anyone who comes up to the top can't go back down. Two first reminds this to Lightning when he flies up immediately, and later Bell, Robot Flower, and Grassy when the latter carries the former 2 on her like an elevator. The challenge ends with Death P.A.C.T. Again losing the challenge. Most of the contestants agree that they only did so badly because they never heard the extra rule and proceed to gang up on Two and beat them up. Two then announces that the viewers will be voting to save the members of Death P.A.C.T Again. 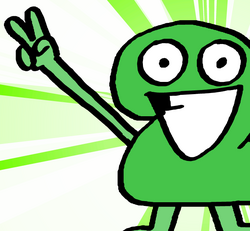