Battle for Dream Island Wiki
Register
Don't have an account?
Sign In
Advertisement
in: Cleanup, Places, Geography,
and 3 more

"Are You Smarter Than a Snowball?"

The Underground is a location that appears in a few episodes of the BFDI series. It is usually accessed by digging downward or a heavy impact towards the ground.

In "Are You Smarter Than a Snowball?", Tennis Ball, Eraser, Coiny, and Woody are stuck underground. Tennis Ball wants to use the bathroom.

In "Get Digging", Fries orders Nickel, Bomby, Dora, Yellow Face, and Rocky to get digging, and they dig deep underground. Fries says they can stop after losing the challenge.

In "Zeeky Boogy Doog", Golf Ball takes her team into her factory, which is located underground.

In "Getting Teardrop to Talk", Stapy and Marker dig down underground. Dora does the same and digs up a container of cyanide.

In "The Liar Ball You Don't Want", underground craters are utilized for the challenge.

In "This Episode Is About Basketball", Marker was playing Toss the Dirt and ended up underground.

In "Don't Dig Straight Down", the underground holes dug by the contestants are filled with magma.

is trapped underground because of the magma. Lollipop tells Saw to swim through the magma get to Four to rescue them, but Saw refused because she does not want to lose her new pink handle. Dora then protects Saw's handle using her mouth, and they both make it to the surface. After Dora notifies Four about the rest of their team being trapped underground by magma, Four is happy to help them, and rescues

Tennis Ball, Coiny, Eraser, and Woody stuck in a hole 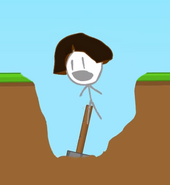 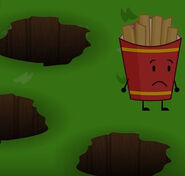 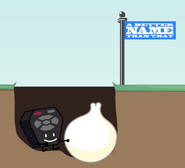