Battle for Dream Island Wiki
Register
Don't have an account?
Sign In
Advertisement
in: Stubs, Articles proposed for merging, Items,
and 3 more

Unicycles are objects used for the unicycle race in "Rescission". They are very unstable, thus difficult to ride on, as shown in the episode. Leafy had gotten used to it, and Bubble won unintentionally without knowing how to ride a unicycle. They are apparently flammable, as Firey burned directly through one.

Unicycles are bikes with only one wheel. It does not have supporting parts to hold on, only the seat and the wheel. Unlike their real life counterparts, these unicycles do not have pedals, meaning that the contestants must balance themselves on it.

Firey, Spongy and Rocky wobbling on their unicycles

Bubble about to fall

Leafy thinking she's got the hang of it 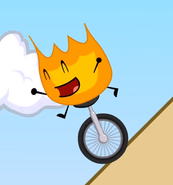 Firey going down a ramp 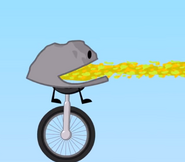 Rocky about to barf his way to the finish line 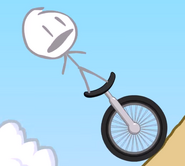 David bleeping "Mary Had A Little Lamb" on the way down

Firey trying to jump on his unicycle
Items
Community content is available under CC-BY-SA unless otherwise noted.
Advertisement