Everyone (one sided, Dicksys side)

1
Dicksy is a character made by DisgustingPepsi.He is the nicest one around but he was made to be the creepiest Tollitubbis.

Nobody seems to like him, because they say he's very creepy. But he still wants to be friends with everyone and help everyone.

He is very tall and Green, with a white TV. and has darker skin from the tollitubbis. He also has sideways eyes, and a sideways mouth. And is drawn by GopluXPoplu.

Tonky Wonka: He tries to not make him very mean because he thinks it will not help him get friends. 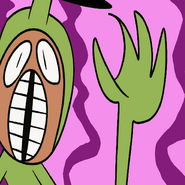 Dicksy's Profile Picture
Add a photo to this gallery
Retrieved from "https://battlefordreamisland.fandom.com/wiki/User_blog:PoTheRedTollitubbis/Dicksy?oldid=624968"
Community content is available under CC-BY-SA unless otherwise noted.