VHSy is one of the former eligible debuters for Battle for Dream Island: The Power of Two, who first appeared in "The Four is Lava". They failed to join, only receiving 1,908 votes, placing 12th.

VHSy appears to be somewhat tidy, as they are shown fixing the loose tape that came out of them. They also appear to not like witty humor, judging by their reaction to Two's jokes and nicknames.

VHSy is a VHS (Video Home System) tape. Their design consists of an orange gradient, where the face is located, and two reels that have tape inside.

In "The Four is Lava", VHSy appears in the first batch of recommended characters who sink into the lava. They also appear in the stinger as Clock angrily walks away from his team.

In "The Escape from Four", VHSy was one of the 26 recommended characters selected by Two as one of the eligible candidates to become a contestant in The Power of Two. Their audition is of them rewinding a loose tape coming out of them.

VHSy is later told that they didn't get enough votes to join, along with Income Tax Return Document, Salt Lamp, and PDA. They're then sent falling through the floor.

VHSy in "The Four is Lava" 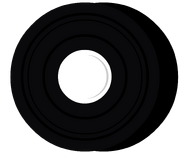 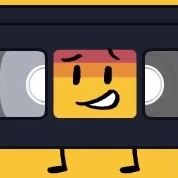