Battle for Dream Island Wiki
Register
Don't have an account?
Sign In
Advertisement
in: Cleanup, Items, Elimination,
and 9 more

Removes half of the user's votes

A Win Token is a green token that can be used in Battle for Dream Island, which takes away half of the votes from whoever uses it at Cake at Stake.

On two occasions, a Win Token has been used: Needle used her Win Token in "Puzzling Mysteries", but she still had the most votes and was eliminated. This was the same case with Golf Ball in "Lofty", as she still had enough votes to be in the top two, despite using her Win Token, and this ultimately resulted in her elimination. Pin also tried to use a Win Token at the last second, but was still eliminated, as it was not allowed.

The first occurrence of a Win Token was in "Barriers and Pitfalls" when Pin got one for ripping the finish line ribbon in the previous episode.

However, When Pin tried using her win token after the Announcer revealed the votes, the token disappeared.

The Win Token briefly returned in "Enter the Exit", where it was revealed that Pin still possesses her two unused Win Tokens. It is unknown whether or not they are still usable. 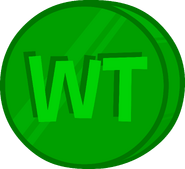 Announcer getting the Win Token out of Needle. 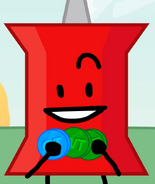 Pin still has her two win tokens from season 1.