Woody's Incredible Journey to the Escape from Eternal Terror

Woody's Incredible Journey to the Escape from Eternal Terror (W.I.J.T.T.E.F.E.T. for short) is a name given to an executable file (.exe) game that is based on Battle for Dream Island. It was made in July of 2010 and completed in 2013. Apparently, it was given as a gift to Andrew Wang (known at the time as losmmorpg) as a mod to his game, The Land of Stuff, a point-and-click adventure game that runs on computers running Windows, but can be run on Mac, Linux, Android, or Solaris with WINE. A link was given to Andrew Wang to download it, but since then, it was considered lost media for 7 years, until its link was made public on October 15, 2017, on Twitter.

Woody is the main character, and Blocky, Firey, Bubble, and Pin are moving NPCs, specifically enemies that if Woody were to walk on them, they will kill him. It was written and coded in Freebasic.

The game can be downloaded here (it is in a 117.36-kilobyte zip archive folder). Despite its download link being public, it was never intended for a public release. Its only appearance to the public then was by a tweet on Jacknjellify's Twitter for a celebration of the new year for 2017. A 4-second long video is also present,[1] which was the only present footage at the time before the link was found by the user ProblematicPeriwinklePlum.[2]

The website's description of the game states, "Originally given during July 2010 as a birthday present to losmmorpg and as a mod to his game, The Land of Stuff, W.I.J.T.T.E.F.E.T. is a Frogger-like game in which you must direct Battle for Dream Island's Woody from a frightening crash site to an oasis of peace."

The player plays as Woody, the protagonist of the game. The player must guide him to a small island with a sign reading "Scary-Free Zone" to win the game. Along the way, Bubble, Firey, Pin, and Blocky clones are trying to stop Woody and kill him. The player must avoid them to win. Hopping on rocks on open water, hopping over trees, and moving fast will help the player get to the island with the oasis, and reach the scary-free sign.

Due to the nature of generation, a file called "map.txt" can be easily edited to make new versions of the map. Here is the list of names of the tiles:

On map.txt, the tiles use numbers, which are responsible for the map generation.

Information about the origin of this game is quite scarce, but it is apparently a hack of Andrew Wang (commonly known as Losmmorpg)'s game The Land of Stuff.

The hexadecimal code of the game can be seen here: Woody's Incredible Journey to the Escape from Eternal Terror/Hexadecimal Code

The screenshot that made the public acknowledge its existence.

The game as it appears when booted. 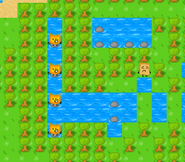 What happens when you go too far down the tunnel.

The icon in Explorer. 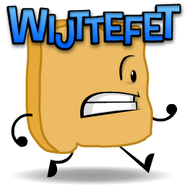 Main icon
Add a photo to this gallery

Grass
Add a photo to this gallery

Retrieved from "https://battlefordreamisland.fandom.com/wiki/Woody%27s_Incredible_Journey_to_the_Escape_from_Eternal_Terror?oldid=1817968"
Community content is available under CC-BY-SA unless otherwise noted.