This page is about the relationships and interactions between Woody and the other characters.

Because of his pan-phobic personality and inability to do a lot of contests in BFDI, Woody barely interacted with anyone and was hated and physically abused by some of the contestants. In BFB however, he became slightly less scared of everything, and as a result, he is shown to be more interactive, helping in contests and making friends with his fellow teammates.

In the Announcer's explanation on what Dream Island is, Woody is the only contestant who is shown to not be allowed onto Dream Island.

In "Are You Smarter Than a Snowball?", "Sweet Tooth", and "Bridge Crossing", Woody panics whenever the Announcer says his name at Cake at Stake.

In "Half a Loaf Is Better Than None", Announcer laughs after he announces that Woody drowned in the basket containing loaves of bread.

In "Return of the Hang Glider", Woody screams when the Announcer reveals that he sold Dream Island.

Woody seems to care a lot for Balloony as he always gets upset when he dies and even killed someone once in retaliation.

In "Getting Teardrop to Talk", when Balloony is deflated, Woody screams in fear.In "Lick Your Way to Freedom", Woody is sad when Leafy pops him.

In "What Do You Think of Roleplay?", Woody screams when Balloony is popped.

In "Don't Dig Straight Down", Balloony tells Woody to dig through the wall, Woody tries to lazily. Woody is once again concerned for Balloony when he dies.

In "The Escape from Four", Woody sits on Balloony's head as they both switch back to BFB.

In "What Do You Think of Roleplay?", he looks at her with a confused expression when she forms from Rocky to herself.

In "The Liar Ball You Don't Want", Bell leaves a nasty dent on Woody's body after he killed Foldy.

In "Welcome Back", Woody is indirectly set on fire by Bomby's explosion.

Status: Minor enemies on his side

In "Take the Plunge: Part 2", Pin reveals that Woody is afraid of Bubble.

In "Let's Raid The Warehouse", which marks their first direct interaction, Bubble defends Woody from Blocky, and tells Woody that she knows the struggle he's going through. Woody is also shocked when Bubble is popped by Flower.

In "Don't Dig Straight Down", when it is shown that Woody is the only one out of Naily, Cake, and himself that can fit through the garbage chute and make it to safety, he hugs them both. When they throw him over to the garbage chute and he sees them burning in the lava and appears to be upset.

In "This Episode Is About Basketball", Cloudy encourages Woody to throw a ball into the basket.

In "Return of the Rocket Ship", when Cloudy tells Woody no more tonguing, Woody and Nickel both look at him angrily.

In "Don't Dig Straight Down", when Cloudy reminds Woody that he's medium height, Woody falls on his side in order to avoid coming in contact with the lava longer.

In the stinger ending of "Half a Loaf Is Better Than None", Coiny tells Woody to shut it when he starts whining.

In "Don't Dig Straight Down", Woody seems to be on better terms with Coiny. He also helps to throw Coiny over to the deprecated garbage chute to unscrew the opening and is concerned for him when he falls in the lava.

The two were never seen directly interacting but they are assumed to be friends since they were on the same team.

Though, Woody didn't seem to care to much about David or Rocky leaving in "Enter the Exit".

In "Take the Plunge: Part 2", Pin reveals that Woody is afraid of Firey.

Status: Minor enemies on his side

In "Take the Plunge: Part 1", Woody is pushed off the balance beam by Flower.

In "Insectophobe's Nightmare", a picture of the eliminated contestants shows a scared Woody who's about to be kicked by an angry Flower.

In "The Liar Ball You Don't Want", Woody rips Foldy in half when she has the liar ball.

In "Why Would You Do This on a Swingset", Woody does his infamous scream and sigh of relief at the Cake at Stake which makes Four mad, so he's screeched.

In "X Marks the Spot", based on Blocky's agreement, Woody tells Four that he doesn't want to help him get X. He tells Four this again while in the air.

In "A Taste of Space", after Woody loses points for sighing and screams, Four takes more points away from his team

In "Who Stole Donut's Diary?", it is shown that Woody sees Four as a scary monster who eats contestants.

In "The Glistening", Woody voted for Ice Cube to be eliminated, along with most of the contestants.

In "Welcome Back", Woody's life is debatably saved when Ice Cube jumps on him to extinguish the fire. Woody technically didn't see her do this so it's unknown how he feels towards her.

Leafy and Woody started off as good friends but are currently not on the best of terms in "Get to the Top in 500 Steps".

In "Who Stole Donut's Diary?", in Woody's testimony, Leafy is shown as a monster who steals everything.

In "Getting Teardrop to Talk", Woody can be seen nervously smiling at Loser in a crowd of characters.

In "Take the Tower", Woody can be seen being impressed by Loser's folding of Spongy's friendship bracelet.

In "Let's Raid The Warehouse", Woody gives Loser some dirt as a gift.

In "Return of the Hang Glider", he slaps Match for not voting Leafy

In "Reveal Novum", Woody is stabbed by Naily in her audition tape. In "Today's Very Special Episode", Woody screams in pain when Naily falls all the way down from Bell's string and lands with her sharp tip hitting his back.

In "Don't Dig Straight Down", Naily apologizes to Woody for stabbing him 7 years ago and Woody forgives her. When it is shown that Woody is the only one out of Naily, Cake, and himself that can fit through the garbage chute and make it to safety, he hugs them both. When they throw him over to the garbage chute and he sees them burning in the lava and appears to be very upset.

In "Return of the Hang Glider", he slaps Needle for not voting Leafy to win.

In "Lick Your Way to Freedom", Nickel kicks and yanks on Woody trying to get him to stick his tongue out. He also tells Woody to dab, which he obliges to.

In "What Do You Think of Roleplay?", Woody screams in horror when Nickel holds a fork in his face.

In "Return of the Rocket Ship", when Woody's plan to use Rocky's vomit to dig proves successful, Nickel tells Woody to "tongue it", which Woody happily obliges to.

In "Return of the Hang Glider", Woody almost slaps Pencil when she chooses to vote Bubble over Leafy.

In "Take the Plunge: Part 2", when Woody is the last one picked and is forced to join the Squishy Cherries, Pin vomits on him. In "Barriers and Pitfalls", she hit Woody away when he tried to climb over her.

In "Are You Smarter Than a Snowball?", Pin kicked Woody because Woody has a fear of tests.

There is a possibility that Woody likes Roboty.

In "Lick Your Way to Freedom", Woody calls out to Roboty in the forest, telling him that they need him. When Roboty is crushed by Cloudy, Woody screams in terror.

In "Four Goes Too Far", Woody calls out to Roboty when he disappears after being eliminated.

In "Don't Dig Straight Down", Woody says "Woboty?" while he falls past the waterfall that Roboty likes to stand by.

Woody falls on Rocky in "Take the Plunge: Part 1" when Teardrop kicked him. Woody had a piece chipped off of him causing him to scream. In "Lick Your Way to Freedom", he screams when he licks Rocky's vomit.

In "This Episode Is About Basketball", Rocky barfs on him.

In "Enter the Exit", Woody doesn't seem to care about Rocky or David leaving.

In "Return of the Rocket Ship", Woody gets the idea to use Rocky's vomit to dig deeper and shakes Rocky, trying to get the rest of the team to understand.

In "Don't Dig Straight Down", due to Rocky eating Nickel, and Nickel being the only one who was holding unto him, Woody grabs Rocky after he barfs more acid so that they could continue falling.

In "Take the Tower", Woody can be seen being scared but feels relieved when Ruby greets him. He is then allowed onto the FreeSmart SuperVan.

In "The Reveal", Woody screams in pain as he's being sawed by Saw in her audition.

In "The Escape from Four", Woody gets cut by Scissors in their audition.

Woody and Taco have a complicated relationship due to Taco's struggle to understand Woody.

In "Take the Tower", Taco comforts Woody when he is afraid of walking on the "tightrope."

In "Let's Raid The Warehouse", when Blocky refuses to acknowledge Woody raising his hand, Taco calls him out and tells Woody he can be a receiver, which makes him happy. When Woody gets his gift, an empty box, he quickly becomes infuriated with it, as Taco nervously tries to explain how he could use it to hide from whatever he's afraid of. Taco says that she thought the gift would help him, making Woody rant at her. Seeming to be too angry to acknowledge that Taco had good intentions with the gift.

In "Take the Plunge: Part 1", when Leafy tells Woody to live his life and enjoy it, he shows that he is in love with Teardrop, however she doesn't share the same feelings, proving it by kicking him.

In "Take the Tower", Woody screams when he sees Teardrop running in his direction. She then sabotages Woody by flinging him off the bracelet.

Woody reveals his crush to Teardrop...

...but got rejected by her. 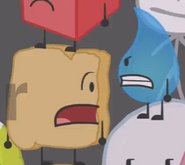 Woody and Teardrop in BFDI 20.

Woody and Teardrop in the BFB 18 thumbnail.

Every interaction between the two is from Tennis Ball's perspective so it's unknown how Woody feels towards him back.

Both Woody and TB were abducted by the spaceship in "Return of the Hang Glider".

In "Enter the Exit", when X asks the safe members of Beep if they are scared about who is leaving, Woody just moans.

In "A Taste of Space", when Woody releases a sigh of relief, X takes away points, which causes Woody to freak out.

Relationships
Retrieved from "https://battlefordreamisland.fandom.com/wiki/Woody/Relationships?oldid=2294863"
Community content is available under CC-BY-SA unless otherwise noted.