The World's Largest Oven is a location in The Desert that only appeared in Battle for BFDI, in the episodes "Getting Teardrop to Talk", "Uprooting Everything" and "B.F.B. = Back From Beginning".

It is hot enough to melt Ice Cube and Lollipop. It can also evaporate Teardrop and set Book on fire.

In addition to being a gigantic oven, it also appears to have a stove with 4 burners on the top judging by the 4 dials on the front. In "Uprooting Everything" the oven is shown in more detail from the inside. There's a door that leads to a purple and pink room and a yellow ladder that leads to a mega mall at the top.

The oven's first appearance was in "Getting Teardrop to Talk", when

had to go inside to retrieve X's basket in the challenge. It was also mentioned in "Why Would You Do This on a Swingset" by Lollipop.

In "Uprooting Everything", the oven returns as the setting of the challenge, which is to find a way to escape it. The glass on the oven door is shattered in the episode.

In "B.F.B. = Back From Beginning", it returns as the last section of the challenge.

Taco and Saw inside the oven

Book catches on fire while running through the oven. 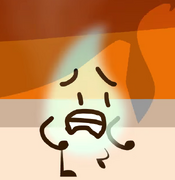 Teardrop evaporating in the oven 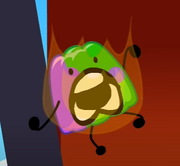 Gelatin getting burnt to ashes