"X Finds Out His Value" (non-canonical)

"Getting Teardrop to Talk" (canonical)

X's first appearance in BFB was in "Getting Teardrop to Talk" where he and Four lead a game to win "a BFDI" (which means the winner will get another Battle for Dream Island). X appeared alongside Four, another abstract being representing a real-life number or variable.

X is simply a drawing of the letter X with a yellow body and lighter yellow limbs. Similar to Four, he is purposefully drawn simplistically, with different assets and four fingers.

X seems to be much more friendly than his partner Four and is usually seen to be quite happy and friendly towards almost every contestant. However, X also seems to be quite soft, as he cries after Four stated that nobody noticed his disappearance (despite Cloudy asking about X), and became frightened after Four screeched at him and when Snowball threatened him in "This Episode Is About Basketball." He can also be considered a bit ignorant, such as congratulating the ground for "catching" Beep after they fell from their plane, or even asking to get screeched by Four. He also shows to get very nervous under pressure. As he hosts in "This Episode Is About Basketball," he's very hesitant while talking and tends to mess up things, such as reading the votes backward when Free Food was up for elimination. X is also quite docile by nature and remains loyal to Four, even after the times Four has mistreated him.

He sets up some of the challenges, as seen in "Getting Teardrop to Talk", where the contestants must reach X to bring his baskets back, and in "Fortunate Ben", in which the contestants must keep their respective teams' plane in the air as long as possible. X is the person who hands out prizes to the safe competitors at Cake at Stake.

He hosts Cake at Stake and sets up the challenge in "This Episode Is About Basketball" as a temporary replacement for Four.

As of "The Escape From Four", X stayed with Two, while Four was sent to elsewhere on Earth along with the 14 contestants who chose to stay in BFB. It is unknown if he will serve the same role in "The Power Of Two"

X's first appearance was in a 2008 animation X Finds Out His Value along with Four, nine years before first appearing in BFB, with Four possibly making up as a host and running gag because of the season they first come back in. This also shows that X doesn't refer to the English letter, but the algebraic variable or the mathematical symbol of multiplication.

X played a major role in the challenge in "Getting Teardrop to Talk". The contestants had to return his baskets back to X, who was standing on a tall platform, to avoid elimination. At the end of the episode, X puts on 4 of his baskets on the night, causing him to spin fast eventually.

In "Lick Your Way to Freedom", X collaborates in the Cake at Stake as the character who throws the cakes, with Four being the one who says who is safe and who goes home/gets eliminated. Later in the episode, he warns Beep that Four won't like the fact that Roboty was missing. Once Beep loses, X tells them that one of them will be eliminated.

In "Why Would You Do This on a Swingset", X reminds Four that it's called Cake at Stake, and not Brake at Flake, prompting Four to insult X. Four later causes X to cry when they say that nobody noticed he was gone (despite Cloudy noticing).

In "Today's Very Special Episode", Four once again causes X to cry during Cake at Stake when X got the number of votes wrong. X also translates Four's muffled speech. X assists Four in placing the team tags on the rating scale during the challenge and offers his opinion on iance's and Death P.A.C.T.'s make-overs. The Loser's make-over was a papier-mâché mold which was encasing X, which may have contributed to their low placing, at 7th.

In "Fortunate Ben", X insulted Pen as, after Four started screeching, he stated that he is a "disgrace to the entire art community." Four said that he was thrown in the limb reattachment center, but when Beep collided with the cliff in the challenge, he thanks the ground. In the stinger, he is "dancing" (on which is swinging its hands) with 2 singers, one distorted, and one low-pitched in the audio.

In "Four Goes Too Far", X first appeared at Cake at Stake. Four asked X who's also safe. X answered by mentioning all of the contestants from Beep except for Cloudy, David and Roboty. When A Better Name Than That was pushing Donut to the sledding, they also have got X, then Four. X ran away and was hiding in one of his baskets off-screen. X was not seen in this episode and beyond this event until the beginning of the 8th episode.

In "The Liar Ball You Don't Want", X is hiding behind a fragment of a Jawbreaker (this, however, was not shown onscreen, instead shown in a flashback in the 9th episode).

In "Questions Answered", the top of X is seen in Fries' box. Gelatin describes them as swollen fries.

X returns in "This Episode Is About Basketball", X is seen among Fries' fries again. Gelatin tries to take some of them but ends up biting X after he is exposed. X screams out of pain, causing him to be found. X, when questioned, revealed that he ran away after Four got multiplied and hid the whole time because he got scared. Donut, sick of hosting, puts X into his position. X accidentally reads the voting results backward, revealing the results from most voted to least (i.e. saying that Stapy got the most votes at the start while Foldy got the least at the end) rather than the opposite. Later X tries to think of a challenge, and after some time, decides on a basketball contest. At the end of the episode, Donut is walking past X, and tells him "Good job today." X simply smiles in response.

In "Enter The Exit", X approaches Cloudy. Cloudy tells him that he has missed Balloony, and asks if he can recover him. X interrupts him, and says that he cannot recover him, however, he does tell him that he is safe. Later, in Cake at Stake, X reads the voting results for Beep, until it went down to David being eliminated. Because of his elimination, David quickly runs away. X chases him down and managed to catch up to him, shoving him inside his head. Eventually, once that is cleared up, X returns, only to find the contestants arguing. X grabs their attention to tell them the 10th contest, however, he gets interrupted by Clock by telling them to "bring back Four". Once Four was extracted from Donut by Firey and shaped by Pin, X missed him and had hugged him.

In "Get to the Top in 500 Steps" X confirms to Four that he missed a lot and shows what to do in the challenge while Four describes the challenge.

He is later heard disguised as Four when iance was declared safe, making a joke about Team Ice Cube! being up for elimination. Four (disguised as X) says that the joke was horrible, and X answers with the fact that, since they switched bodies again, Four technically told the joke. They start to argue, but eventually, Four gives up.

Later, X is seen standing next to Four. They stand there motionless for a little while, then X busts a hole in the ground and goes hurdling towards the center of the earth at 2,763 miles per hour, to find his treasure. The challenge of the episode is to find X's treasure before he does.

As X is on his way to the treasure, he receives a thought from Tennis Ball that says "X is stupid". X's smile turns to a frown. At this time, X was thinking about his treasure, which is various emeralds underground, and the coordinates where some of them are located.

In "Don't Dig Straight Down", X isn't seen until the very end at the stinger. He is still in the lava and asks "Why AM I doing this?" and continues to swim through the lava for no particular reason.

In "The Four is Lava", X jumps out of the lava and flies into the sky, pointing down at Four to indicate his location for the contestants to go to for the challenge.

In "The Escape From Four", X comes in and offers Four an orange juice box to make him feel better, though Four does not respond due to the fire (made by Firey Jr.) reaches EXIT's inner wall. Then, X who initially offers him an apple juice box but Four interprets it as X wanting to leave to co-host Two's show. For the rest of the episode, X just stands near Two with a expressionless gaze. 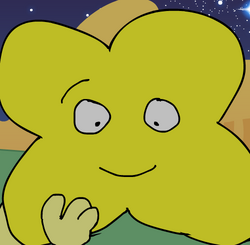 Retrieved from "https://battlefordreamisland.fandom.com/wiki/X?oldid=1877737"
Community content is available under CC-BY-SA unless otherwise noted.