Battle for Dream Island Wiki
Register
Don't have an account?
Sign In
Advertisement
in: Yoyleland, Food, Items,
and 2 more

"Return of the Rocket Ship" (cameo)

Yoyleberries are a unique species of berry fruit in Battle for Dream Island. They are used as the main ingredient in cooking Yoylecake and Yoylestew, and they can also be eaten fresh. They are commonly found (and so far, only found) in bushes located in Yoyleland, but can of course be grown from the seeds of another Yoyleberry. Though it was mentioned as an ingredient for Yoylecake before in "Don't Pierce My Flesh", its official appearance was in "Get Digging", when Gelatin, Needle, and Puffball went to Yoyleland to collect the berries to make Yoylestew for the contest.

The effects of consuming a Yoyleberry are adverse as the consumer's bodily composition will be converted into a strange metal called Yoyle Metal, an unknown material that is unfreezable.

This material is really heavy, and contestants affected by the Yoyleberry's anomalous effects can't jump high or run. 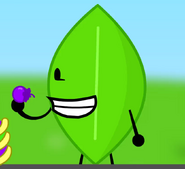 Leafy sitting next to some Yoyleberry bushes 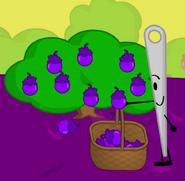 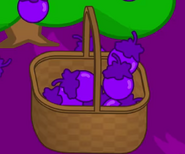 A basket full of Yoyleberries 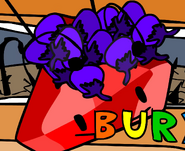