Battle for Dream Island Wiki
Register
Don't have an account?
Sign In
Advertisement
in: Items, Cakes, Season 1 items,
and 5 more

For other uses, see Yoylecake (disambiguation).

Yoylecake is a fictional food that appeared in BFDI and BFDIA. It is made from the exotic Yoyleberries, which originated and are found in Yoyleland. Any object who eats it becomes a gray, metal version of themselves made from Yoyle Metal.

It is colored royal purple and neon green, lined with light yellow icing and decorated with orange icing drops.

The first appearance of Yoylecake was in "The Glistening", though it has been mentioned several times before that mainly by Bubble, due to the fact that "Yoylecake" is her catchphrase. For example, Bubble exclaimed "Yoylecake!" after winning immunity in "Rescission".

Later in the same episode, during the long jump contest, Bubble, having eaten the Yoylecake, turns metal in midair. Leafy then mentions the side effect of turning metal by eating Yoylecake.

In "Don't Pierce My Flesh", the cake used for Cake at Stake is the Yoylecake. At the end of the episode, everyone turns into metal because they ate a slice of the cake.

In the stinger of "Insectophobe's Nightmare 2", Announcer says that for getting into the final three, Bubble, Leafy and Firey can ask for anything they wish. Bubble says she wants Yoylecake, but the wish is denied as it doesn't fit into BFDI's budget. 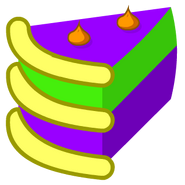 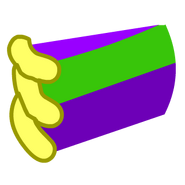 A small slice of Yoylecake.

Yoylecake in the Battle of the Fantasy Foods 2016. 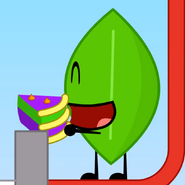 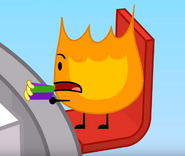 Yoylecake appears as a recommended character in "The Liar Ball You Don't Want". 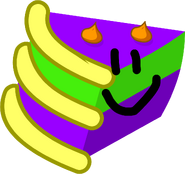 In "Don't Pierce My Flesh" too.

Bubble with a slice of Yoylecake on the Fantasy Food truck in 2016.