Battle for Dream Island Wiki
Register
Don't have an account?
Sign In
Advertisement
in: Articles including conjectures, Other, Yoyleland

Yoylese is the written language of Yoyleland. The first to read it in any video were Golf Ball and Tennis Ball. The language was named in Battle for Dream Island: Official Character Guide, where a page states "Golf Ball is capable of deciphering the ancient lettering known as Yoylese."

Some of the hieroglyphs resemble other common symbols, such as a triangular infinity sign, a close square bracket, an upside-down flag four, a hyphen, a Z, a spiral, a 3 with a long tail, a triangle, a 4, and something that looks like a dash connected to a pipe (|).

Heiroglyphs below a helmet, food (possibly a square cookie), the wall teleporter TB used, neuron, what appears to be blood, and a box. 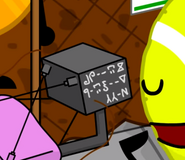 Tennis Ball reading instructions: "It can teleport anybody through a wall of up to 6 inches in width. But it can only teleport one person at a time." 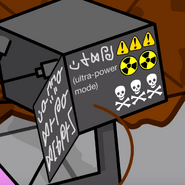 Tennis Ball reading instructions: "Allows you to teleport through walls of up to 12 inches. But it will take several weeks to charge up for such an extreme energy usage."
Community content is available under CC-BY-SA unless otherwise noted.
Advertisement